Rethinking everyday resilience in the built environment of the city

Adaptive capacity and resilience are now seen as desirable qualities for a wide range of social actors and dynamics: from individuals coping with personal stress, to cities that may be vulnerable to disaster or terrorist attack. Resilience has assumed a normative character, entering the vocabulary of decision-making organizations across the world. From a concept aimed at encapsulating how people cope with change in the contemporary and historic sense, resilience has become a decision-making matrix and a tool for supporting policy choices.

Climate change and security concerns have made resilience a central discursive and strategic component within the context of urban spatial, social and political transformations. However, this framework has rarely been applied to the understanding or management of everyday changes in the social and built fabric of the city. Although the dynamics and properties of adaptation, adaptive capacity, and flexibility are frequently brought up in policy and scholarly debates on this topic, they have seldom been seen through an explicit resilience lens.

There is, therefore, a clear need to enrich the analytical vocabularies of urban policies with a unified and critical conceptual approach focusing on the relationship between urban resilience, on the one hand, and the everyday practices undertaken by households in response towards or anticipation of externally-induced change, on the other. Such an endeavor may also help reclaim resilience from the increasingly technocratic, reactive and mechanistic policy interpretation of the concept.

Over the past 10 years, I have undertaken field research across several European countries – with a special focus of the cities of Gdańsk, Budapest, Ljubljana and Skopje – to explore how people practice resilience in their everyday life, in response to wider economic, social and cultural shifts. I have been particularly interested in illuminating the wide range of creative and largely informal strategies that arise at the nexus of relations between households and their residential dwellings. Much of my work has focused on inner-city areas where change takes place via gradual and deep-seated processes such as gentrification, residential upgrading, and in-situ adjustments.

Many of the people who I worked with have been affected by various forms of social exclusion, principally due to being of an older age, lacking stable or adequate employment, or having low incomes. Due to a range of historic and geographical regions, many inner-city districts in Central and Eastern Europe host disproportionately high number of pensioners and income-poor households.

My research has examined the manner in which inner-city households ‘practice’ an alternative and bottom-up form of urbanism by making physical alterations or additions to their apartments over time. I have thus focused on the adaptation of seemingly rigid housing structures in line with the fluid everyday needs of different household members.

I have argued that resilience can be connected to the notion of ‘retrofit’ – understood in very broad terms, as adding a component or accessory ‘to something that did not have it when manufactured’. In current policy and academic debates, retrofits are often understood within the growing effort to improve the energy efficiency of existing buildings in light of the policy challenges posed by climate change. While there is a significant amount of engineering-led work on the subject, it has become increasingly apparent that policy-led retrofits can only work if they are implemented within a comprehensive effort that recognizes the complexities associated with enacting change among consumers and local authorities, as well as the role of wider socio-technical systems, institutions, innovation, and multi-stakeholder collaboration.

Many experts emphasize the importance of retrofits to the broader dynamics of ‘urban sustainability transitions’, involving a systematic re-engineering of the built environment and urban infrastructure. In line with such debates, my work has sought to explore the different forms of social, technical and political resilience that allow for retrofits to happen on a grassroots basis during extended periods of time.

I found that the forces and interventions that allow buildings to be upgraded and transformed by their residents are rarely guided or supported by formal state policy. In many ways, this process can be captured by the notion of ‘bricolage’, as it the outcome of a patchwork of unco-ordinated actions, and results in a tapestry of forms that extend both within and beyond the built confines of the home. 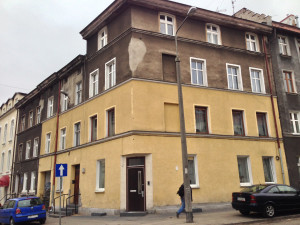 The resulting landscape of ‘do-it-yourself urbanism’ encompasses a fragmented array of domestic and neighbourhood spaces. It is associated with the emergence of a new mobility and consumption patterns, which in turn interact with the uneven geography of economic development and infrastructure provision in the city to privilege some social groups, built tissues and temporal horizons over others.

Figure 2: A landscape of do-it-yourself urbanism – additions and modifications in a 1970s apartment block in Ljubljana 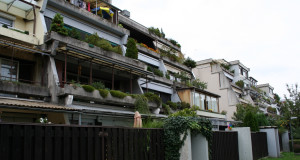 The degree to which residential buildings may be transformed via different types of alterations hinges on the internal features of the households such as income or education, in addition to the structures of the built environment: the technical characteristics that facilitate or prevent the transformation of tenement buildings from the 1930s will be very different from those of a prefabricated panel block from built the 1970s.

It has also transpired that households and individuals value resilience in different ways, and may not necessarily behave in rationally predictable ways when it comes to transforming their residential environment in response to externally-induced pressures. This relationship can be linked to emergence of social exclusion, because socio-political changes in production and governance systems can lead to the ‘entrapment’ of disadvantaged households in non-flexible spaces that embody the mismatch between social and built infrastructures.

I also uncovered the existence of a plurality of perceptions and understandings of resilience and flexibility. While some individuals see the ability to change or adapt their everyday spaces to new circumstances as a key priority in everyday life, others have emphasized the attachment to place, habit and stability. In the low-income post-industrial Gdańsk district of Nowy Port, the economic and residential precarity of many households was be countered by conscious efforts to appropriate public spaces in the neighbourhood. Through this process, local inhabitants were able to build a dynamic relationship with their everyday space, without having to accept the dominant logic of capitalist consumption.

If there is one ‘take home’ message from my research, it is that national, urban and neighbourhood authorities need to develop more sensitive policy tools and systematic knowledge about the different forms of housing dynamism in the built fabric, as well as the mobilization of informal and alternative economies towards in-place transformations of the built environment of the home. A deeper understanding of the diverse mechanisms through which residential buildings and people may embody complex processes of adaptation can lead to a radical rethinking of existing understandings of urban resilience in relation to external and internal shocks and stress.

Biography: Stefan Bouzarovski is Full Professor of Geography and Director of the centre for Collaboratory for Urban Resilience and Energy at the University of Manchester. Follow Stefan on twitter at @stefanbuzar